We’re back from a marvelous holiday in the South of France!  We had a lovely time – the girls swam in the Med, admired the sunsets, ate A LOT of biscuits and Nutella, co-slept with Grandma and spoke the odd French word. 🙂

Here’s a sketch of the view from our apartment, made by M – she’s hoping to paint it soon.

On Sunday we made a sad goodbye to Grandma and Granddad and then the girls played in the garden before going off to their Aunty Sh’s house for a barbecue.  I spent those precious hours madly planning meals, doing an online food shop and making an enormous ideas list for the week.  I love doing this now, it gives me a sense of control and allows me to strew and plan at the same time.  Plus, I am a list lover.

I also ordered M a speed cube – on holiday, she was getting us to time how long it took her to complete her Rubik’s cube and it was becoming obvious that it was getting too clunky and the stickers were starting to peel off.  I had to do quite a bit of research as to which one to get (who knew there was such a speed cubing industry out there?!) so I hope I’ve chosen the right one.

Back to Sunday, on my ideas list I’d written ‘stay up late and star gaze’ and the sausages chose to do that when they’d come back from the barbecue.  Unfortunately it wasn’t a starry night but we did spot Saturn, Jupiter and Venus.

Onto Monday, the sausages were already wanting an activity by 9am so we had a look at the list and decided to do this cloud activity.  I did manage a quick recap of how rainfall happens without getting booed off but they already knew most of it anyway. 😀 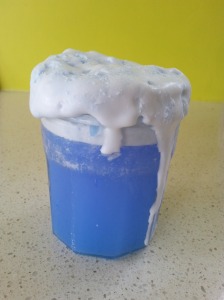 The rest of the day was spent with M speed cubing, Minecrafting and watching Matilda.  D decided she wanted to spend the day playing Rainbow Fairies.  We have to act out all 7 books, D is the fairy and I play one of the girls who finds her.  It went on for hours.  Jeez. I’m not a natural role-player but I do try really hard to find the joy as D takes so much pleasure from it.

Tuesday morning was spent with M at art class (she’s finished her Van Gogh, pictures next week!) while I tried to chat to other Mums and alternately chase D around the park.  The afternoon was quite low key, although we did manage more fun with shaving foam, pipettes and food colouring.  I don’t know if you can make them out but M’s (on the left) is a volcanic island with a beach at the bottom and D’s is a flower. 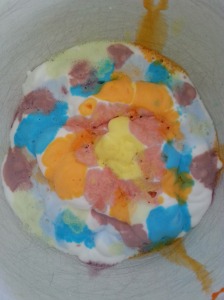 The sausages love pipettes so then I cut them out some butterfly shapes to colour in. 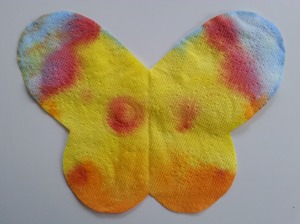 And lastly, we did a little map exploration before heading off to Brownies.  D was telling me with a sigh that she loved maps in a ‘I just can’t help myself’ kind of voice so I found this UK map with county lines and we looked at where our next holiday destination is (Whitby). After colouring in North Yorkshire, D went on to colour in Northumberland (last year’s holiday destination); West Yorkshire (where her Aunty S lives); Nottinghamshire (where her Grandparents live); Greater London (where we live); and also marked where the Giants Causeway and Loch Ness are!!  M was painstakingly labeling her counties in teeny tiny writing but D didn’t want to.  When I asked her how she was going to remember which county was which, she then rattled all their names off to prove she could.

I haven’t posted for a long time because it feels strange to be commenting on how my nearest and dearest are living their lives (and also invasive?) especially when they’re social media savvy and can do so themselves if they wish to. So I feel it’s now time to lay Educating Sausages to rest. It certainly served it’s purpose - home education can be a lonely road and it was a pleasure to share our lives with you for the past few years and to peek inside yours too. I’m now sharing bits of my own life over at @bbgbabba It’s mainly health and fitness related as at 44 I’ve only just realised that sitting on the sofa all day will not help with my longevity 🤷🏻‍♀️ You’re welcome to come and join me and watch me embarrass myself. Thank you for all your support and kind words ☺️ Love Lucy